This photo was taken the day we go the keys to our own flat. Look at our faces. Our young, naive, unexacting faces. I love living with my boyfriend in our own little flat. He lets me have complete creative control over what we put on the walls and theres nothing better than getting into bed together at the end of the day, but there were definitely quite a few things i didn’t expect or think about when i moved out of my parents house. 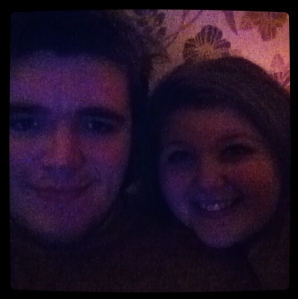 No one else tidies.

It might sound ridiculous but i really didn’t realise how often my parents used to tidy up behind me when i lived with them. I definitely noticed when my plates in the sink didn’t disappear and i had to hoover everywhere myself!

Theres so much you need to buy all the time.

Not only when you first move in do you need things like a hoover, washing machine, pans, plates and so on and so forth, but through out the weeks and months there are constant purchases of washing up liquid, glasses, shampoo, toilet paper, again, the list goes on. I never really put much thought into how much stuff my parents had to buy to keep the house clean and tidy.

Having no money is scary.

Before i moved out, having no money was scary. Once i moved out and having no money meant the possibility of not having gas or electric or even losing the flat, it sure as hell made me buck up my ideas. There are still times i’m a bit skint but i’ve definitely grown up a lot when it comes to money and i know what i can and cant spend on random stuff now.

You barely see anyone.

I’d guess my boyfriend doesn’t feel as much like this with him being an only child and two working parents, but for me, i wasn’t prepared for spending so much time alone. I have two older brothers and for many years my mum was a stay at home mum, so i never really spent more than an hour or two in the house on my own. Now i can be in the flat on my own from nine in the morning till four in the afternoon which is strange, but I’m slowly getting used to it.

This has also made me appreciate my friends even more! I don’t have loads of friends so those i do have are quite close friends and theres nothing i love more than them coming round, it brightens up my whole week when i get to hang out with one of them.

People expect you to suddenly become an adult.

This definitely depends on what age you move out. When i moved out i was only seventeen. I’d have spat out anyone who said it at the time, but i really was practically still a child. People around me seemed to expect me to immediately become a fully matured adult who knows exactly how the world works rather than having the learning curve that i had.

Some times being a house wife is nice.

I never ever thought i’d write something like this. I’m super ambitious and definitely want to build my career but for now I’m staying at home while my boyfriend goes out to work. I never thought i’d come to enjoy cleaning the house and making food, but i really am. I throw on some music or netflix while i cook or clean and it goes by in minutes. I definitely won’t be doing this forever because its just not me, but i can definitely understand why thats what so many women want to do, and hey, all the power to them.

Suddenly that £6.99 for netflix is expensive and that 99p DVD is none to cheap either, especially not after the 34p asda home brand washing up liquid i just bought. Moving out is definitely something you need to save up for. We had £1000 to move out with and to buy essentials with and honestly, we should have saved more. That’s not even with moving vans or anything, we roped our parents into driving back and forth with boxes.

Nights on your own are scary.

Now, this might just be me being a scaredy cat, but nights i spend on my own are night i spend being terrified of nothing and jumping at every little sound. My boyfriends nan isn’t too well so he’s been staying with her occasionally and though i don’t mind that at all, i wish i had someone to stay over to stop my imagination from racing the way it does.

I dont think i ever locked a door behind me when i lived at home, not once. Now that i’m in my own flat though, that door is closed with two locks and a chain. No ones getting into my flat unless i want them to!
Thats all for now! If anyone has anymore of these points or any tips about moving out don’t forget to comment them down in the comments! I hope you all enjoyed this post.

2 thoughts on “Things i didn’t expect when moving out.”