I received my first (but hopefully not last!) Blurt Buddy Box from winning a competition on Twitter. All i had to do, if i remember correctly, was post a picture and a little caption about something that makes me happy. I was informed i had won a few weeks later, gave them my address and four days later i had my box, so the postage is pretty quick for anyone who is as impatient as me.

What the Blurt Buddy Box basically is, is a little box of things to help people feel a little happier. Its to help deal with depression. Of course, a little box of stuff isn’t about to cure anyone, but it gave me a few hours on a bad day where i felt pretty okay. 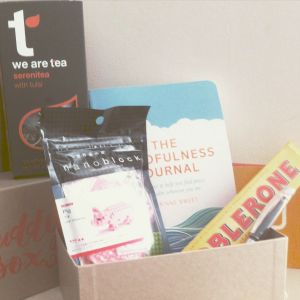 There was a lot more stuff in this box than i was expecting, so lets get into it! The first thing i took out was the ‘nano blocks’ which are very similar to lego but smaller and thinner so they take more time to put together. I immediately started assembling it. The instructions were really clear but it still took me the best part of an hour and a lot of concentration, which is great because it meant that i was completely distracted from my emotions. It made me feel quite nostalgic too since i grew up with two older brothers and the only thing we really did together was build lego creations.

In the box was also some luxury tea, which i was immediately excited about since i’ve only really ever had typical english breakfast tea and green tea. This tea is from ‘We are Tea’ and the tea i had was ‘Serenitea’. I wasn’t sure i was going to like it after giving it a quick sniff, but i was pleasantly surprised. It was very floral and when i added a little sugar i was reminded slightly of rose turkish delight. I will definitely be buying more tea from here. I had a lovely big mug of it while eating the Toblerone bar that also came in the box. 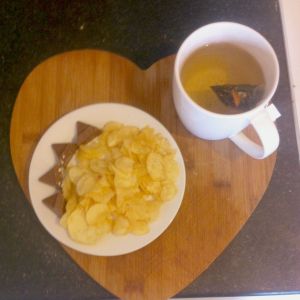 I think my personal favourite thing in the box was ‘The Mindfulness journal’ by Corinne Sweet. Each page guides you through mindfulness techniques to help you feel more relaxed and happier. Me and my boyfriend have both been trying techniques from this and though, again, its not an instant ‘cure for depression’ by any means, it definitely gives me a few minutes of being anxiety free. A pen also came in the box that i’ve been using to underline my favourite parts of the journal.

The final thing in the box was some post cards from ‘Blurt it out’, who the box is from. They’re a great foundation working to help remove the shame and stigma from depression and the post cards had some information about them and also one with a little box for you to write a message to someone and then leave it somewhere for a stranger to find. Theres also a discount code on it for the stranger to get their own Buddy Box for 15% less.

I’m sure you can tell by this post how much i love this box. I’ll definitely be ordering myself another one and, if money allows, at the end of the month i’ll hopefully order one for my best friend. I’d really suggest this box for anyone with depression, and if you get it for a friend i think it’ll really show you care and really give them a smile. I hope you’ve enjoyed this post and don’t forget to click on any of the links above to go to a page to buy any of the products!