Now that I’ve started eating vegan, I’ve become much more creative with my food and what I’m eating, as well as significantly healthier, and that means I’ve created things like this delicious falafel inspired salad. I say falafel inspired because it was my first attempt at make vegan falafel and they fell apart in the pan, so I found a way to create this salad with a cucumber and soy milk (you can use any milk you like) dressing. Keep reading to find out how I did it! For the ‘falafel’ part, you’re basically going to make falafel but without any binding agents (I didn’t know I needed them at the time okay, and at least I got a good meal still!). Super easy and quick, you’re just going to put around half a can of drained chickpeas, half a red onion, three cloves of garlic and plenty of different herbs into a food processor or blender until it looks like what you see in the picture below! Then cook in a frying pan with around a tea spoon of coconut oil on medium heat until the mixture is fairly dry and golden brown. While that cooks, you can take a minute to make the dressing which is beyond easy. Throw around a two inch long piece of cucumber, a clove of garlic, a splash of soy milk and a touch of dill into a blender and whiz it up until its the consistency you like.

Once you’ve cooked the ‘falafel’ mixture and created the cucumber dressing, you just need to cut up your salad and place it up! I used lettuce, cherry tomatoes, spinach and beetroot for mine, but you can mix it up with any vegetable you like! I think one with different peppers would be lovely and give a real Mediterranean feel. 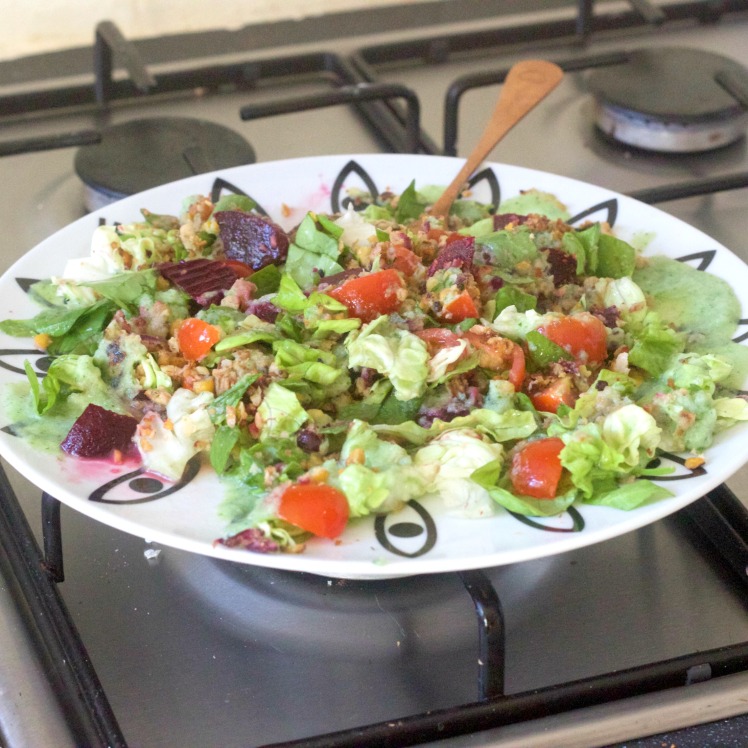 Once its on your plate, mix it up and eat! It’s yummy, its healthy and its incredibly easy to make. You could also totally box this up with the dressing separate and take it on the go to work or school. If I’ve learnt anything from my new plant based diet its that healthy vegan food definitely isn’t boring!