I love that more and more vegan to-go options are becoming available so despite it only being the start of November, when I saw there was a festive vegan wrap I just had to grab it. I don’t get Wicked Kitchen foods often because at £3 for a wrap I do think it’s a bit pricey, but I do also think it’s a high enough quality that its value for money. 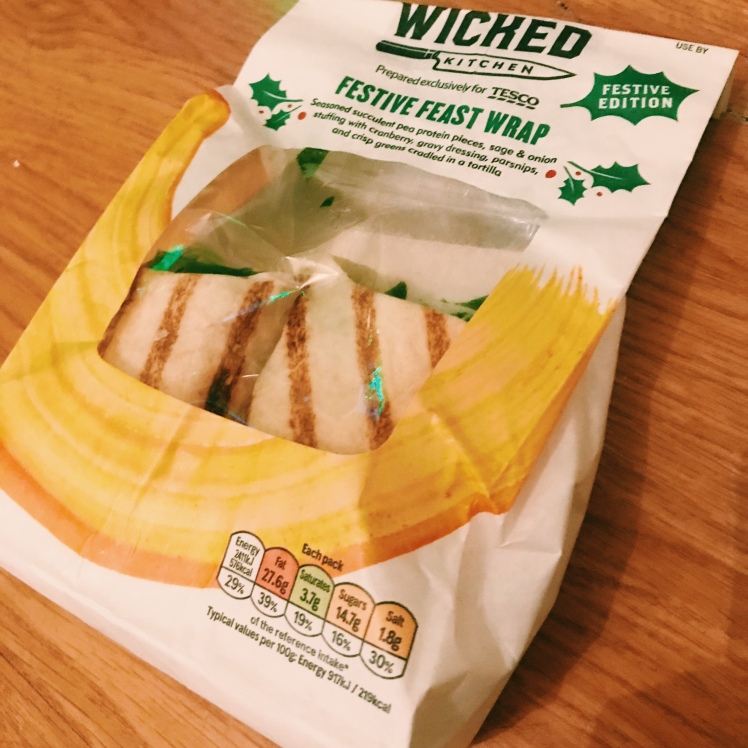 The description of this wrap on the packet is ‘seasoned succulent pea protein pieces, sage & onion stuffing with cranberry, gravy dressing, parsnips, and crisp greens cradled in a tortilla’ and that’s what it was. The only issue I had was that all of the pea protein pieces and dressing were in one half of the wrap more so than the other, leaving half of it dry greens.

Aside from the uneven distribution of ingredients, it is a delicious wrap. The pea protein is very reminiscent of turkey without being too much like an imitation meat, the cranberry adds a little bit of sweetness that works well with the stuffing and greens and the gravy dressing tastes a lot like gravy without tasting like cold gravy which I imagine would be pretty gross.

Chances are I’ll probably pick this up at some point again because I did really enjoy it, but at £3 and not part of the meal deal it will definitely be a way to treat myself rather than just any old lunch. I mostly just really love that there’s a vegan festive option since I feel like I’ve really missed out on Christmas food the last two years I’ve been vegan.

What’s your favourite vegan on the go option?