I was always a big fan of the packet lattes I drank while not vegan, but since then I’ve not been able to find any without dairy products in the ingredients. Until now! Nescafé have released 3 dairy free latte options, oat, almond and coconut. 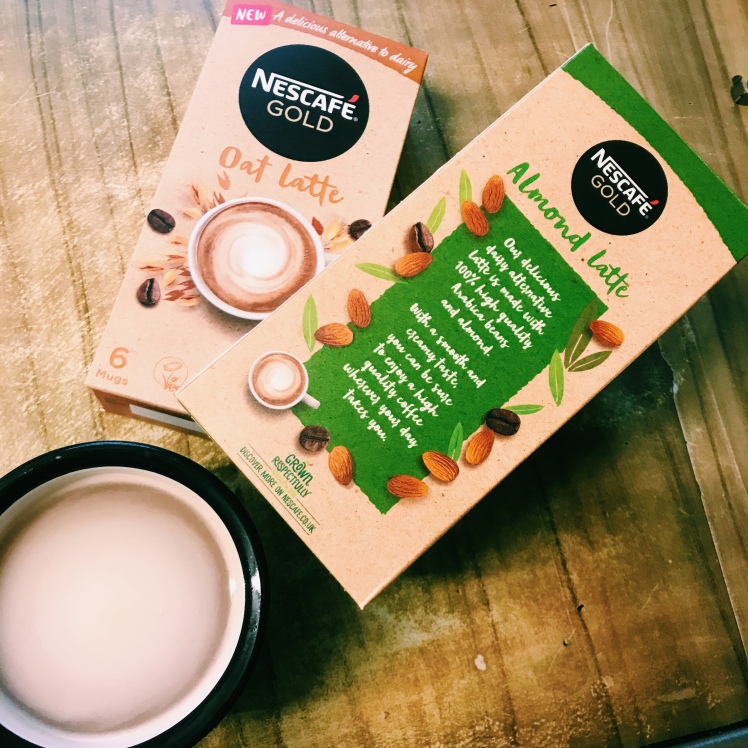 I tried the almond and oat ones today so I thought I’d take a minute to let you all know how they are! They’re £2.50 a box with 6 sachets inside, but I got these from Tesco where they currently have a 2 for £2.50 deal. They’re a bit pricey to have too often myself, but if you usually buy a coffee or have just made the switch to veganism and usually buy coffee sachets they’re likely a cheaper or similarly priced dairy free alternative.

The almond one is almost too sweet for me, it’s lovely but it’s definitely not one I’d have as my first coffee of the day. The oat one is more of an ordinary latte, creamy with a little foam but not too sweet. The oat one also doesn’t really have a particular flavour to it outside of coffee, whereas you can really taste the almond one. Luckily, I like almond flavoured things so it’s all good to me. I kind of wish I’d gotten the coconut one rather than the oat, just to see how that flavour plays into it.

The box says to pour 200ml of hot but not boiling water into a cup with the contents of the sachet, stir well, wait 20 seconds and stir again. When I followed this instruction, I was left with half a cup of coffee and a thick, grainy sludge at the bottom. Definitely fill the cup half way, stir well, fill the rest of the way and wait like the instructions say before stirring again. It’s annoying that the instructions aren’t really accurate to the product but at least it’s not a difficult fix.

Both that I’ve tried are creamy, have a small amount of foam (the same amount as any packet coffee of this type) and have a nice amount of coffee flavour to them. All in all, not something I’d buy too often myself but a really great vegan alternative that I’ve not been able to find before!